ANNOUNCEMENT: Meet The Family, The Broons


Selladoor are thrilled to announce that casting for Scotland’s most famous fictional family is complete! Meet The Broons in their live on stage World Premiere, adapted by Rob Drummond.

The Glebe Street gang have featured in DC Thomson comic strips in the Sunday Post since 1936 and this production celebrates them in their 80th anniversary year. Award-winning Scottish playwright Rob Drummond brings the iconic characters Granpaw, Paw and Maw Broon, Hen and Joe, Daphne, Maggie, Horace, the Twins and the Bairn to life for a Scottish audience in a production filled with laughs, love and comic-strip visuals, all set to a Scottish soundtrack.

The cast will feature Kern Falconer as Granpaw, Paul Riley as Paw, Joyce Falconer as Maw, Tyler Colins as Hen, John Kielty as Joe, Laura Szalecki as Daphne, Kim Allan as Maggie, Euan Bennet as Horace, Kevin Lennon and Duncan Brown as The Twins, and Maureen Carr as the Bairn.

The Broons will open at Perth Concert Hall on 27th September before dates in Inverness, Kirkcaldy, Stirling, Aberdeen, Ayr, Dundee, Edinburgh and Glasgow.

This world first theatrical staging draws inspiration from the famous comic strip to bring you a brand new lively and fast paced tale. Can Maggie really, finally be getting married?! Return to Glebe Street, the But an' Ben, and of course the Kirk to find out!

The Sunday Post, home of The Broons, featured our company and their excitement at joining the cast. Read the full article HERE 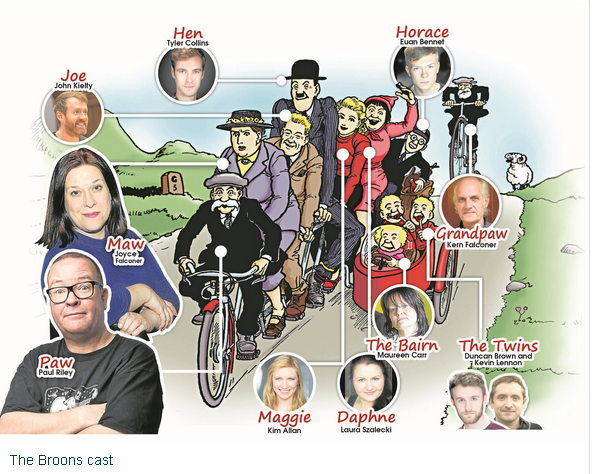